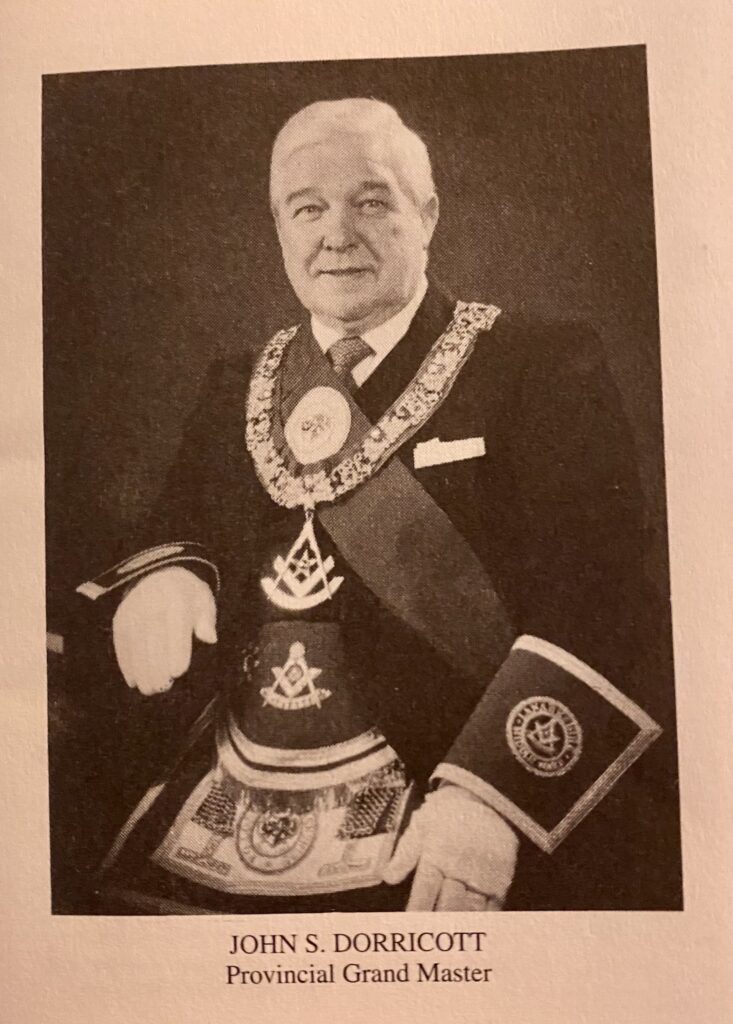 The Grand Master Mason, Bro. James Marcus Humphrey of Dinnet, duly installed Brother Dorricott at a ceremony in Hamilton Town Hall on the 23rd May 1986. Brother Dorricott’s team contained names well known in the Province to this day;

This is the first installation of a PGM where a deputation of the reigning Masters in the Province is recorded as being introduced.

Provincial Grand Secretary could have written the minutes of committee meetings without attending. The same chestnuts appear time after time, late Lodge returns, rough working at MM degrees and problems with social clubs. Thankfully the 250th Anniversary of Grand Lodge appeared on the horizon.

A special West of Scotland Committee was formed to co-ordinate celebrations among the Provinces and PPGM Roy Syme was appointed to represent Lanarkshire Middle Ward.

The Middle Ward’s formal contribution was a successful garden party at Hamilton Race Course. Many visiting brethren from around the world were entertained at lodge functions throughout the Province.

Erskine Hospital was the focus of much of the non- masonic charity fund raising in the Province.

Visits by the “Erskine Road Show” are recorded by many lodges.

The Holiday Caravan was deemed to be no longer fit for purpose and a proposal to spend £3,700, purchasing a second hand facility at the Maidens site in Ayrshire was accepted.

Following further complaints of rough working in the 3rd Degree the Provincial Grand Master decided to no longer allow visiting Lodges from out-with the Province to confer the Master Mason degree. This decision was, to say the least, controversial.

On a happier note in 1988 the Rev. Peter Owen Price makes his appearance in Provincial as Junior Chaplain. Bro. Price would go on to serve the Province as chaplain until the installation in 2016 and his service was recognised by award of the rank of Honorary Depute Provincial Grand Master.

As thoughts were on Christmas celebrations on the 23rd December 1988 many people in Lanarkshire saw strange red colouring in the sky to the south. Debris from Pan Am flight 103 had landed in Lockerbie. The tragic event obviously stimulated support among our lodges for the people of Lockerbie and many fund raising events were organised. Provincial donated £200.

1989 saw the proposal to form Lodge Meridian being accepted by Committee. The new Lodge, No.1779, was consecrated on the 14thOctober.

Some discussion took place concerning the 175th Anniversary of Provincial Grand Lodge but no special events were organised. The brethren seemed more concerned on fund raising for the Masonic Homes and a special Burns Supper was planned for Hamilton Town Hall.

The raffle for the Caravan Fund, now a fixture of the New Year Draw, made its first appearance.

January 1990. Brother Dorricott informed the brethren that he intended to remain as PGM for a second five years.

1991 – 1996
Brother Dorricott was reinstalled as PGM by the Grand Master Mason Brother Sir Gregor McGregor of McGregor Bart. at a special meeting in Hamilton Town Hall on the 17th of May.

The refreshed commission held a special meeting Cambuslang in July 1991 when the “New Jersey Masonic Kilties” delivered an exemplification of the Master Mason Degree in front of nearly two hundred brethren. The meeting was hosted by Cambuslang Royal Arch Lodge No. 114.

Brother Dorricott tried manfully to continue his leadership but his health precluded any active involvement and the task was shared until the end of the commission initially by Depute Alexander Fraser and Past Depute Jack Reid. Sadly Depute Provincial Grand Master Alexander Fraser resigned his commission and was succeeded by Donald Mathieson as Depute to head the Province until the installation of a new PGM. The absence of an active PGM had placed an additional burden on the Secretary, George Kelly, who was commissioned as Substitute and Brother Lesley Falconer replaced him as Secretary.