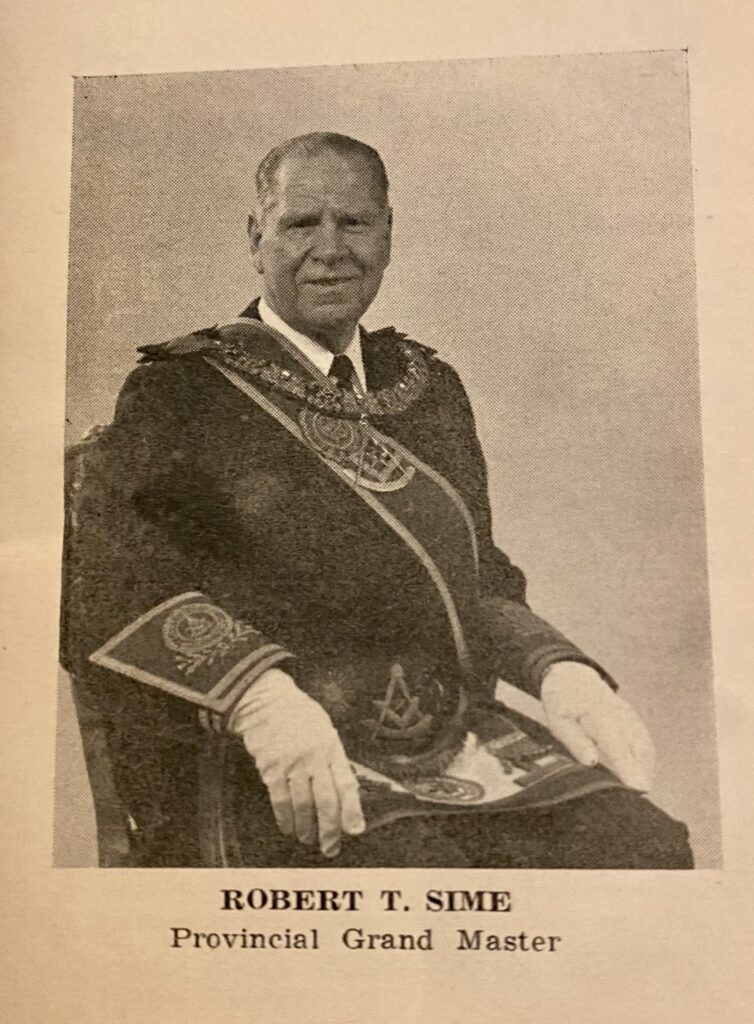 If you believe in omens then 1976 started well for Freemasonry in Britain. Brotherhood of Man won the Eurovision Song contest.
Bro.. Robert T Syme (Past Depute PGM) happily succeeded Brother Straiton as Provincial Grand Master and was duly installed by the Grand Master Mason, Bro. Captain Robert Wolridge Gordon of Esslemont in Hamilton Town Hall. As far as we know they did not sing the winning song “Save All Your Kisses For Me”. The new Provincial Grand Master commissioned a strong team;

Publication of a PGM quarterly communication seems to have been the practice in the seventies. Brother Syme’s first communication resonates with today’s objectives when he congratulates Lodge Caldercruix 1314 on the success of their community Old Folks day and also commends Hamilton Kilwinning No.7 on their refurbishment of the Television lounge in the Hamilton Eventide Home. The PGM goes on to encourage the rest of the Province to participate in worthy non masonic events.

The Minutes of the October 1976 committee show the first stirrings of interest in providing holiday accommodation for needy brethren. The Depute PGM     (Alex McGregor) was charged with looking into the possibility of acquiring a caravan.
The caravan facility was finally opened at a site in Peebles in May 1977. The running costs were estimated at £250 per year. The caravan, though useful, proved to be too small and was upgraded in 1979.

The minutes of various committee meetings show some discord over a variety of issues in the Province such as;
The Use of the Blanket in 3rd. Degree ceremonies
A proposal to bring forward the AGM to October.
The increasing number of PGL social events.
The use of Benevolent funds for pensioner parties.
Late returns from daughter lodges
There seems to have been an increase PGL social activity with events such as Family weekend breaks, Master and Wardens dinners and Annual Dances.
The Province appears to have come to the view that these were detracting from social events in the daughter lodges. Similarly bringing forward the AGM hardly seemed practical when significant numbers of lodges were late with their annual returns. The proposal on the change of AGM was defeated.
The first two years of Brother Syme’s commission saw him lose two valuable friends in Provincial Grand Secretary Robert Russell who died in 1976 and Past Provincial Grand Master Brother Kenneth Byres who died I977.

While researching the minutes you can’t help wondering if there was so much more Provincial activity than today that justified an Assistant Secretary. Many brethren thought not sufficient to justify an honorarium, though one was eventually granted.
The Queens Silver Jubilee appeal in 1977 sparked much activity in Provincial and in the lodges which resulted in the Provincial Grand Master presenting the Provost of Hamilton with a cheque for £660 towards the appeal.
The Province appears to have regularly borrowed consecration vessels from Glasgow and following their use in consecrating the new temple for Lodge Dura 1513 it was proposed and agreed that the Province should acquire consecration vessels.

Lodge Fleur de Lys No 1722 was consecrated in March 1978. The ceremony was held in the Masonic Hall Clark Street Airdrie. The proposal to create a new lodge with associations to the Scout movement had been made a year earlier. The Provincial Grand Master presided over the ceremony.

January 5th 1980 dawned and Brother Syme performed the second new lodge consecration of his term with the birth of Lodge Burns Immortal No.1730. The ceremony took place in Hamilton Town Hall followed by a celebration dinner.

Brother Syme warmly congratulated Brother McGregor and in summing up his term of office he said that it had been both enjoyable and at times stormy but he hoped he left the Province in good heart.