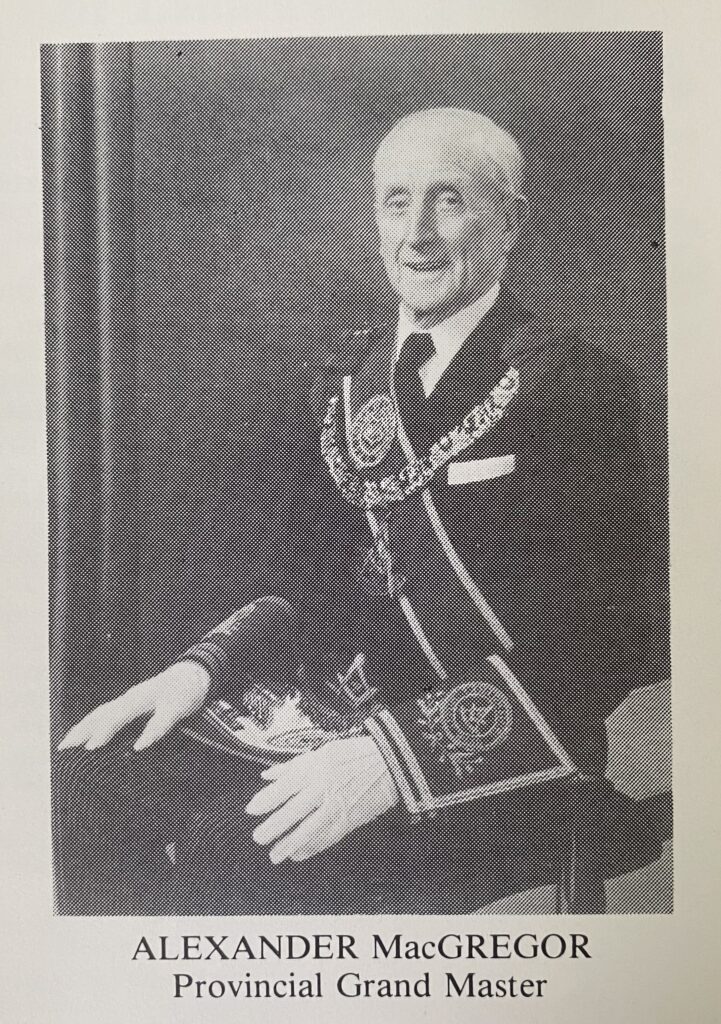 Brother McGregor’s installation as Provincial Grand Master had taken place on the 29th of May. The Grand Master Mason, Sir James McKay, presided at Hamilton Town hall. Interestingly on that date the Provost of Hamilton District Council, Brother J Swinburne (Lodge No.948), presented the new

PGM with a charity medallion to commemorate the contribution of Provincial Grand Lodge to charity work throughout Hamilton District. Brother Swinburne was also an affiliate member of Lodge Buchanan No.1499 the first of two members of that lodge to hold the office of Provost. Brother McGregor’s team for the commission consisted of;

The post of Assistant Secretary, which had been much discussed in the previous year, seems to have been abandoned.

Reading the minutes of both the Quarterly Communications and the General Committee meetings you get the strong impression of a quiet orderly term until 1983. Intrigue then appears to have gripped the province prompting Brother McGregor to announce, paraphrasing Mark Twain, that rumours of his demise were being much exaggerated and that he intended to fulfil his five year commission. The PGM also castigated those in his commission who were reported to be offering commissions in exchange for support in becoming the next PGM.

The minutes reflect a quiet Province for the remainder of the commission, though discussion on the use of the blanket continued together with the now established pattern of late lodge returns and problems with social clubs.

Grand Lodge confirmed that the PGM, Alexander McGregor, had intimated that he would not seek a second commission. The Provincial Grand Secretary Brother John S. Dorricot and Brother Malcolm Dow both indicated their wish to follow Brother McGregor as Provincial Grand Master.