“The purpose of this arrangement is to confirm their commitment to work in harmony with each other for the advancement of freemasonry in their respective country, province or district. That by mutual co-operation they will promote the exchange of knowledge and ideas, with the intention of furthering the principles and tenants of Scottish Freemasonry. It is likewise agreed that regular contact will be maintained to advise and update each other on masonic, charitable and social functions, targets and achievements.  The Brethren of the respective Province and District will be encouraged to interact and play an active role in this agreement when in each others country.” 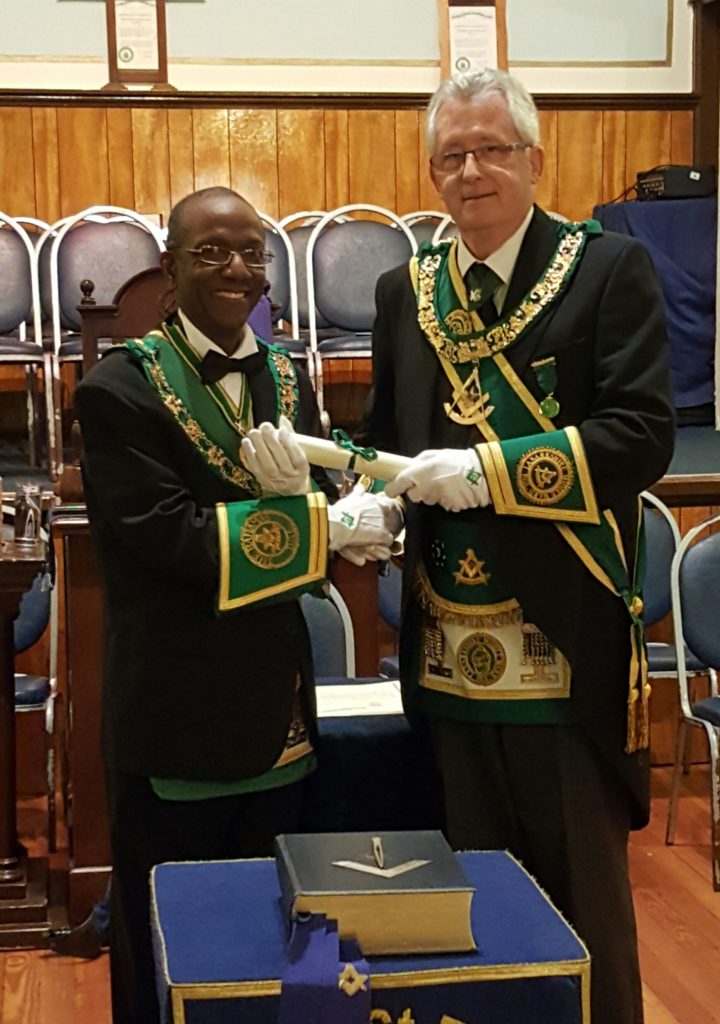 The Deputations were warmly welcomed by Bro. Harry Simpson, RWM who tendered the maul as a token of fealty to the RWPGM.

Bro. Andrew E Paterson, RW Depute Grand Master was admitted to the Lodge and again was warmly welcomed by Bro. Harry Simpson, RWM who tendered the maul as a token of fealty to the RW Dep.GM.
The RW Installing Masters, Bros. Stephen H A Campbell PM and John A. Anderson PM were admitted and proceeded to install Bro. Derek Campbell PM as RWM and the remainder of the officebearers into office in a most competent manner. As one of his first duties the RWM offer the maul to the RWPGM who thanked him and said that he would retain the maul to carry out further business.

The RWPGM requested that Bro. George R Kelly should carry out the ceremonial relating to the Twinning of PGL of Lanarkshire Middle Ward and the DGL of The Bahamas. Bro. Tom Davidson IPPGM and Acting PG DoC presented Bros. Bill Perry and Joseph R Curry in the west of the lodge prior to them taking an obligation on behalf of their respective Province and District after which they both signed the Twinning Agreement following which the Agreement was read out to the assembled brethren.

Following this the RWPGM invited Bro. Joseph R Curry to accept honorary membership of PGL of Lanarkshire Middle Ward, he readily accepted. The deputation from DGL of The Bahamas comprised 49 brethren and 21 ladies who had been in Scotland since Monday 26 November.

Following the return of the maul, the lodge was closed and the brethren retired to the installation dinner.